Downley Day brings out the crowds 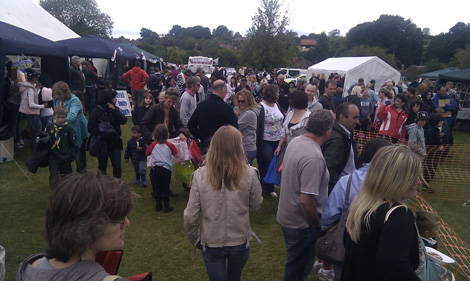 The organisers of this year's Downley Day celebration had to contend with some challenging weather conditions but as always, the crowds turned out and it was hugely enjoyed by all.

The festivities began on Friday night after a day of pouring rain. The marquee recently purchased by DOSCA ( the Downley Old School Community Association) was home to a family disco.

On Saturday morning stall holders were setting up their pitches, anchoring down firmly their tents and gazebos against the wind.  An attractive cafe was set up in the marquee together with a variety of stall holders displaying their wares. A bouncy castle and slide appeared and fairground rides and stalls set up.

The event was opened at 1 o'clock by the Downley Queen and her two attendants. The stalls were set for brisk business as the crowds arrived. The Downley Parish tent provided a mine of information - the Library, Downley Preservation Society, and the launch of the new Downley web site all prominently displayed. Guides provided delicious hot dogs and beefburgers in rolls;  the Gardening Club had a wonderful selection of plants and shrubs; the Youth Group stall had the added attraction of an impressive motorbike for youngsters to try sitting on. Playgroups, WI groups, Church groups, Brownies, the Coffee Stop  and so many more local clubs and societies were represented by stalls running games and offering items for sale. Special mention should go to John Johnny, the excellent MC whose cheerful commentary and music selection kept the whole event rolling. There was an almost continuous line of events in the arena - among them country dancing by children from the Downley School, a dog obedience and agility display, an impressive performance of African drums and dancing. Katy Kartwheel gave children the opportunity to try out various circus acts and gave two performances of her own acrobatic skills with Hoola hoops. She was cheered when she carried on with her act despite a heavy shower!

View more images of the day

View a video of the Cheerleading display

Send us your images of Downley Vllage